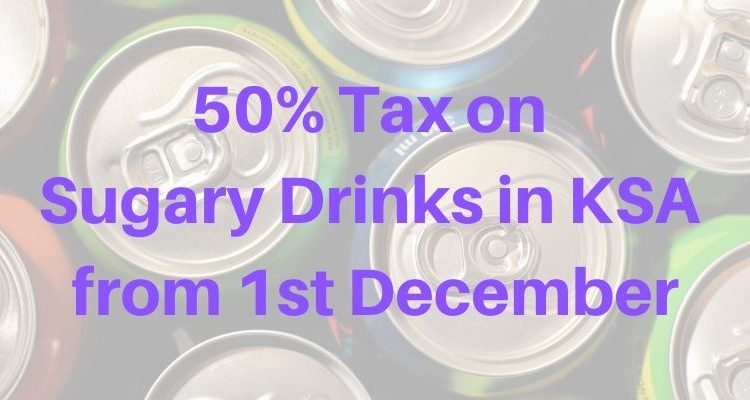 50% Tax on Sugary Drinks in KSA from 1st December

This is to inform you that there is 50% on sugary drinks in Saudi Arabia. It will be implemented from the 1st of December 2019. Saudi Arabia is about to start collecting the 50% of Tax on Sugary drinks from December 1st.

It has been announced by SPA (Saudi Press Agency) that such tax is starting from the next month. It has been official as per the GCC (Gulf Cooperation Council) agreement. Saudi is slowly collecting and applying the Tax in each category of drinks and other products. Who do you think?

For your information, they are already collecting the VAT 5% tax on soft drinks and other products such as 100% tax on tobacco and cigarettes. There are also other taxes on fizzy products and soft drinks as well but it only 50%. Read more: You Access Government Websites/Apps with your Zain Sim For Free.

According to GAZT (General Authority of Zakat Tax), it is a step towards the good health of people living in the Kingdom. Because all sweet products and drinks are reported badly against the good health of the Saudi people. So they have taken the step to stop these kinds of drinks as much as possible. Read more: Huroob Expats Are Completely Banned from Re-entering into KSA.

Moreover, many people that this only because the government needs money from its people. However, what we think is this for the good health of each citizen and expatriates living in the Kingdom of Saudi Arabia. We must thank the government for taking steps forwards towards improvements.

There is good news too, any sugary drink contains at least 75% of milk is Tax-free. However, there are no taxes on such products. Moreover, companies and consumers can make these drinks better to add more natural fruits, milk, and related items. That way there will no tax and people will stay healthy. Read also: Now there is a Ban on Shisha, Barbecue at Public Places in KSA.

Before this, the government has started collectin VAT 5% of Tax for the better future of the Kingdom and to improve the non-oil revenue. Moreover, it is a good vision towards the Saudi Vision 2030.

I am Shams Ali, I started my career as a blogger in 2013 and also worked on an Android & iOS niche platform to get some extra income for a living. I mostly cover topics on How to guides, KSA updates, Internet Packages, Facebook, Messenger updates and sometimes product review too. I'm 25 years old.

How to Switch Number to Another Network KSA

Madina Public Parks are Open to Public from 20th August