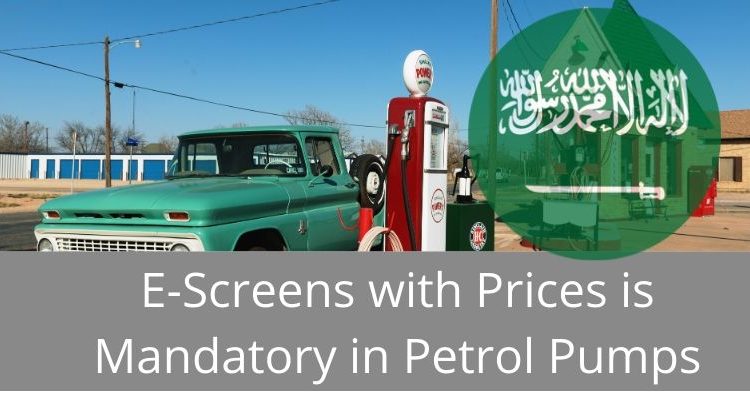 E-Screens with Prices is Mandatory in Petrol Pumps in KSA

There is some strict news for petrol station holders in Saudi Arabia. The new Gasoline owners and old ones who don’t have the e-screens installed are now required to install them in the gas and fuel stations. It should be with prices, and other details of the Gas, petrol price, etc.

The news has been recently announced by the Ministry of Municipal and Rural Affairs. There are strict orders too if fees if you don’t obey the orders. It is our suggestion to install the e-screen as soon as you can. Because there are fines you will need to pay if you don’t have it.

It is important for all the petrol stations to display the petrol price while entering the station. They are also required to show prices for Gasoline 95 and 91 kerosene and diesel. The Ministry mentioned that it is now mandatory for petrol pumps to have it, both old new opening stations.

Do you know why did they implement this, because it seems to be a part of Saudi vision 2030? Also the main is to show the people of Saudi Arabia the transparency in each place about the price. I think it is a great service for both customers and station holders.

It is strictly announced that the price should be the same as per the government orders and should be before any announcements. Definitely Saudi Arabia is taking steps towards a better and bright future for the people in the Kingdom.

For your information, there are thousands of petrol pump holders in the kingdom who might be charging you more while the existing price maybe not that much. What I mean this is a great step the Saudi government has to take to control the frauds around the Kingdom in petrol and Gasoline price. What do you think about these implementations, let us know below?

I am Shams Ali, I started my career as a blogger in 2013 and also worked on an Android & iOS niche platform to get some extra income for a living. I mostly cover topics on How to guides, KSA updates, Internet Packages, Facebook, Messenger updates and sometimes product review too. I'm 25 years old.

How to Switch Number to Another Network KSA

Madina Public Parks are Open to Public from 20th August